SYRACUSE, NY (November 20, 2018)-- The Salvation Army has announced that Majors Ivan and Christine Rock have taken their newly appointed post as the divisional commanders of the Empire State Division. 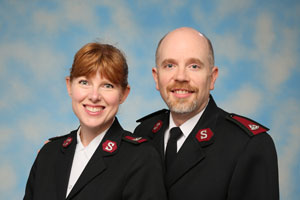 Majors Rock began their appointment in the Empire State Division, which spans forty-eight counties across New York State, by visiting many local Salvation Army worship and community centers that now fall under their leadership.

"We are happy to report that there are great things happening in The Salvation Army's Empire State Division," says Major Ivan Rock, Divisional Commander. "We believe there are greater things to come as we focus on effective service delivery and holistic care that ultimately transforms the lives of those we serve.”

Major Ivan Rock was born in Plattsburgh to a set of Salvation Army officers appointed to the region. As a child he lived in numerous locations throughout upstate, NY and graduated from LeMoyne College in Syracuse before attending officer training.

“Arriving in New York is a homecoming for me,” said Rock “and I am truly excited to lock arms with our officers, staff, donors, volunteers, and neighbors to serve our communities. As The Salvation Army turns its focus to Christmas we encourage everyone to join us in our “fight for good” this season by picking up a gift for a child on an Angel Tree, ringing the bell at our iconic red kettles, volunteering to serve a meal or distribute gifts or simply give at our kettles, online or however you provide your ongoing support to The Salvation Army."

Major Ivan K. Rock has served in The Salvation Army for 28 years. Before coming to NY, he was appointed as the Divisional Commander of The Salvation Army in New Jersey. Major Rock possesses a Master's Degree in Organizational Leadership from Gonzaga University and a Bachelor's Degree from LeMoyne College in Syracuse, NY.

Major Christine J. Rock, now Divisional Director of Women's Ministries for The Salvation Army Empire Division, has been a Salvation Army officer of the USA Eastern Territory for 28 years. She was the Program Secretary for The Salvation Army Massachusetts Division before moving on to New Jersey to serve with her husband as its Divisional Leaders. Major Rock holds a master’s degree in Pastoral Counseling with a concentration in Marriage and Family Counseling and a bachelor’s degree in English Literature.

Support The Salvation Army’s efforts in your area by visiting empire.salvationarmy.org or by calling 1.800.SAL.ARMY today.

About The Salvation Army

The Salvation Army, established in London in 1865, has been supporting those in need without discrimination for more than 135 years in the U.S. More than 25 million Americans receive assistance from The Salvation Army each year through a range of social services: food for the hungry, relief for disaster victims, assistance for the disabled, outreach to the elderly and ill, clothing and shelter to the homeless, and opportunities for underprivileged children. The Salvation Army tracks the level of need across the country with the Human Needs Index (HumanNeedsIndex.org). The Salvation Army has served survivors of every major national disaster since 1900. The Salvation Army does not place an administrative fee on disaster donations. During emergency disasters, 100 percent of designated gifts are used to support specific relief efforts. For more information, go to SalvationArmyUSA.org or follow on Twitter @SalvationArmyUS.

The Empire State Division of The Salvation Army covers 48 counties in upstate New York and one city in Pennsylvania (Sayre, Pa.) Our annual Red Kettle Campaign in November and December helps our 40 community and worship centers, service areas in Buffalo, Rochester and Syracuse and 167 volunteer driven service units raise funds that remain in each community to help those in need. For more information, go to empire.salvationarmy.org or follow on Twitter @salarmyempire.