Pathway of Hope Gave Her Direction

Jackie has come a long way in the past several months - literally and figuratively speaking.

“We just recently moved here from Las Vegas, Nevada,” Jackie shared. “Because my kids’ fathers live out here. I just wanted them to be much closer.”

Jackie packed all of her belongings in a small trailer attached to her car and set out for a long road trip, leaving her home out west and moving into Oswego, New York. “I came here to be kind of reasonable and kind of set myself up with better plans in life,” she said.

The only problem was, as a single mom with four kids, she needed help finding the right direction to go. “I kind of was lost. I didn’t know where to go, what to do,” Jackie said.

But after walking into the Salvation Army of Oswego County, she found that help when she met Kristen, who serves as the case manager of an initiative called Pathway of Hope. “Pathway of Hope is really helpful in our community, because it really helps people become more self-sufficient,” Kristen explained. “We want to try and help them get off assistance, and be able to provide for their family. There’s a hope piece to it, just giving them more support, helping them be more motivated, and [making] changes in their life for the better of their family.”

That’s when Jackie’s life would begin to change.

“She came in and she was lost and had no idea what community resources there were in Oswego,” Kristen said. “I was able to get her story and figure out the best way that I could help her. I was able to do assessments, see if she was willing to change, see where she was hope-wise which was a little bit low.”

Since March last year, Jackie has been making changes to improve her life through Pathway of Hope. Though she didn’t have a job or a GED coming into the program, she and Kristen worked together to address those issues. “We looked at goals, what she wanted to accomplish. And we went from there and we just started tackling tasks one by one,” Kristen explained. “Getting a GED, getting a job was another. I found out she had a background in health home aid type work, so we looked at getting her a certificate for that. Helped her with funding and transportation to help her get that certificate. And then we were able to get the certificate so she was offered employment, so then she started working.”

Through Pathway of Hope, Jackie was even able to receive some assistance with childcare, making it easier for her to attend classes each week as she pursued her GED. “We were able to use the YMCA drop-in childcare, I was able to set up her account, and had it set up so that she could bring in her kids there 1-2 hours a day once a week so she could study for her GED.”

In the months since enrolling in Pathway of Hope, Jackie has made tremendous strides in turning her life around, both for herself and her kids. Since May, she’s been working as a patient care assistant. “I’m doing 32 hours a week, Tuesday through Friday, and it’s 10 to 6, and I have three days off I get to spend with my kids,” she shared. “It makes me feel very good.”

And it’s not just Jackie who has been getting help from Pathway of Hope - her oldest son, O’Ryan, has also been making big strides in his life. “Once mom or dad start working on stuff, the kids will want to start working on stuff,” Kristen explained. “O’Ryan has finally gotten his high school diploma, and that I think was a huge barrier, they’ve been working on that for a while. And after that he got his permit, and he just got his five hour course done, so now he can take a driver’s test.”

“It makes me feel really good, and with her helping us, between both of us I think we’re really excited about it,” Jackie added.

With a steady job and a GED in her sights, Jackie hopes to eventually transition from paying monthly rent to buying a house for herself and her kids. She also intends to work full-time once she earns her GED. “That’s my next goal,” she said.

Jackie believes without the help she received through Pathway of Hope, her would have turned out much different. “I was lost, so honestly, I’d probably still be lost somewhere,” she explained. “Nobody wanted to help me with [anything], That’s how I ended up at the Salvation Army, and they were tremendously helpful.” 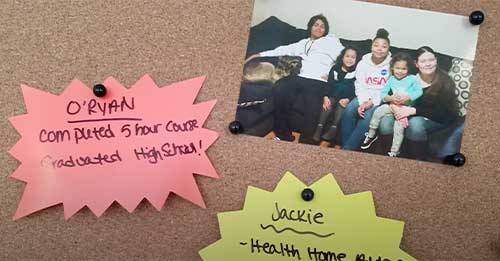 “She’s doing a lot better,” Kristen said. “Her level of hope went up quite a bit.”

Jackie says the work Kristen has put in to help her through Pathway of Hope leaves her with nothing but gratitude. “I love her, she’s been so good to us,” Jackie shared. “I really and truly appreciate everything she does to help out with me and my family.”

Jackie’s story is proof that no matter your circumstances, there is hope for you and your family. It’s programs like Pathway of Hope that enable The Salvation Army to continue doing the most good for the families we serve throughout our local communities, including Oswego County.

The Salvation Army's Pathway of Hope

If you're a family receiving public assistance that feels stuck in your situation and is ready to take steps to pull yourself out, consider The Salvation Army's Pathway of Hope program. The Salvation Army's Pathway of Hope initiative provides personal coaching services and referrals to families with children who desire to take action to break the cycle of crisis and vulnerability that repeats generation after generation. It seeks to address the root causes of poverty in addition to The Army's history of compassionate serving. By helping families overcome challenges like unemployment, unstable housing, and lack of education, we are leading families down a path toward increased stability and, ultimately, self-sufficiency.